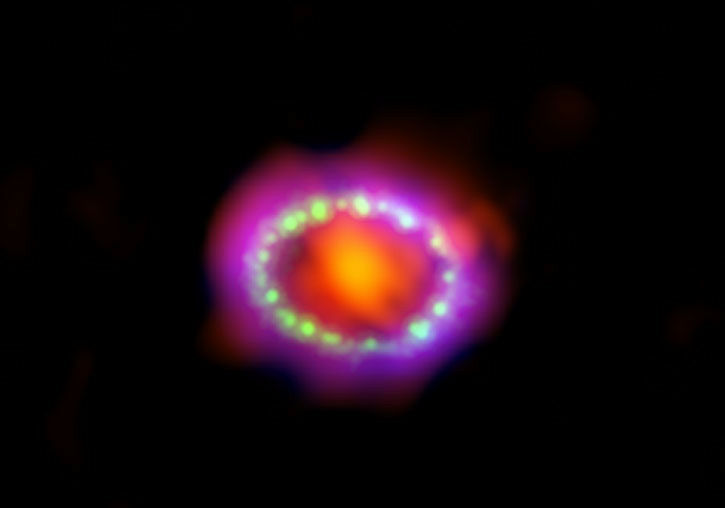 A team from the Institute of Corpuscular Physics (IFIC, UV/CSIC) predicts that supernovae can be a source for determining the mass of neutrinos. This is explained by a theoretical study published in the journal Physical Review Letters. The experimental confirmation of the proposal is carried out within the framework of the international collaboration DUNE (Deep Underground Neutrino Experiment), whose future detector will observe, for this work, neutrinos from supernova explosions.

Neutrinos are known as the most elusive particles. Due to their unique properties, they travel unhindered along their path until, exceptionally, they interact with other particles and generate observable signals. Neutrinos from supernovae -specifically from SN 1987A, located in the Large Magellanic Cloudhave previously been observed by the Kamiokande-II, IMB and Baksan water neutrino detectors. The importance of this detection received the 2002 Nobel Prize in Physics for Masatoshi Koshiba.

Supernovae, specifically core collapse supernovae, are impressive astrophysical events that occur when a massive star dies and releases huge amounts of energy. The collapse takes place in a few seconds and almost all the released energy is released through neutrinos and antineutrinos, the detection of which could help physicists to broaden their knowledge of these elementary particles and, in general, of the universe.

"One of the properties of neutrinos that can be studied with supernovae is the absolute value of their mass, unknown until now", says Federica Pompa, doctoral candidate at IFIC and corresponding author of this work. "The more massive the neutrinos, the slower their propagation speed in interstellar space, which will induce a temporary delay in their detection on Earth. For this reason, a precise measurement of the energy and detection time of supernova neutrinos in our detectors can provide a measure of their mass." The detection of twenty antineutrinos from SN 1987A has already made it possible to set a first upper bound on the mass of the neutrinos.

In this work, the IFIC research team -Federica Pompa, Francesco Capozzi, Olga Mena and Michel Sorelsuggests that the future DUNE detector could be the first to capture the outburst of the first phase of supernova collapse, neutronisation, whose signal is visible only in neutrinos and not in antineutrinos. DUNE can observe these electron neutrinos from their interactions with the detector’s argon nuclei.

In this work, the IFIC research team -Federica Pompa, Francesco Capozzi, Olga Mena and Michel Sorelsuggests that the future DUNE detector could be the first to capture the outburst of the first phase of supernova collapse, neutronisation, whose signal is visible only in neutrinos and not in antineutrinos. DUNE can observe these electron neutrinos from their interactions with the detector’s argon nuclei.

Knowing the mass of neutrinos would revolutionise modern physics, since it would mean accepting that neutrinos have mass, something that the Standard Model does not recognise.

The IFIC in DUNE

The DUNE experiment, currently under construction, is primarily devoted to studying neutrino oscillation phenomena using a beam produced by a human-made particle accelerator. The experiment also presents other opportunities for the field of research. Among them, the physics of neutrinos from supernovae, the Sun or cosmic rays. The DUNE physics program also includes more exotic phenomena, such as the detection of proton decay or neutrinos from dark matter annihilations.

The IFIC team has been part of the DUNE collaboration since its creation in 2015, contributing both at a theoretical and experimental level. At a theoretical level, the researchers from the Valencian centre have been making outstanding contributions to the physics of experiment, particularly in the area of physics searches beyond the Standard Model. At an experimental level, the contribution of IFIC, and of DUNE-Spain in general focuses on the construction of two subsystems of the DUNE liquid argon detectors: the light detection system and the temperature monitoring system. IFIC experimental scientists have also been contributing to the construction, operation and data analysis of the DUNE detector prototypes at CERN, as well as to the development of analysis tools.

The longest time delay ever measured between multiple images of a quasar - 22.09

Orbital motion detected near black hole event horizon - 22.09
The University of Valencia gathers in Torrent more than 200 world experts in Earth Observation to assess the health of the planet - 16.09
Related Stories
Physics

A physical-nuclear technique fixes for the first time the origin of Valencian flint and establishes new mobility parameters in the Paleolithic - 18.07
This site uses cookies and analysis tools to improve the usability of the site. More information. |