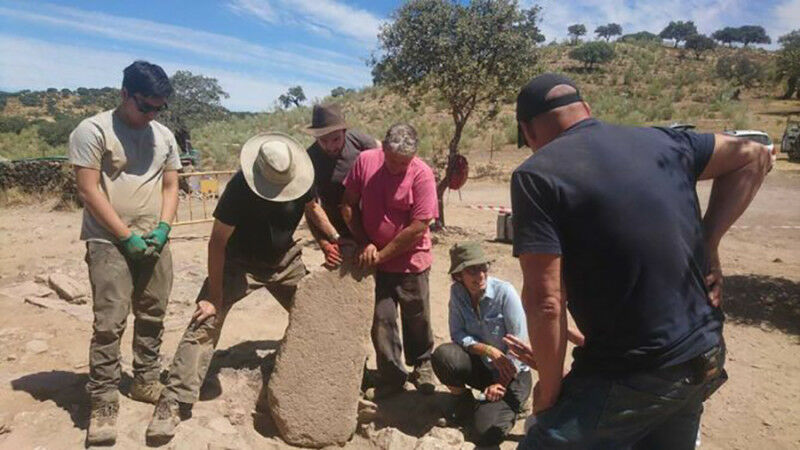 An international research that integrates experts from the universities of Durham, Seville, Southampton, Huelva and Gothenburg has just located a prehistoric stela, of the type known as ’warrior’ in the burial complex of Cañaveral de León (Huelva). This is the second stela found in this site.

The new warrior stela presents graphic motifs centered on a character characterized by a series of personal elements (sword, bow and arrow, spear) and is in an excellent state of preservation. This is an exceptional discovery, both because most of these known prehistoric monuments were discovered by chance, and not as a result of scientific research, and because the new piece discovered is integrated into the funerary architecture of the complex, which allows, for the first time, to know and understand the social context of this type of monuments.

This research is being carried out in the framework of the ATLAS Research Group’s collaboration with the project ’Maritime encounters: a counterpoint to the dominant terrestrial narrative of European prehistory’, led by Johan Ling (University of Gothenburg, Sweden).

In April 2018, a prehistoric stela of great importance was discovered in Cañaveral de León (Huelva) , currently integrated in the permanent exhibition of the Museum of Huelva. The scientific study carried out of that piece established the importance of the place where it was found, located on the road of Las Capellanías, in the same municipality, and the originality of the graphic motifs and work techniques that it incorporates.

Recently, an ongoing international investigation, carried out by experts from the universities of Durham, Seville, Southampton, Huelva and Gothenburg, has revealed a large burial complex on the site where the first stele originally appeared. This funerary space includes a large stone tumulus with two burial chambers, as well as several cist-like structures and other descriptions, still under investigation.

A research in the Abric del Pastor of Alcoi manages to isolate an episode of Neanderthal occupation - 04.10

Presentation of the 150th anniversary events of the Historical Building - 20.09

New data on how Levantine art was made and how it has been preserved to date - 14.09
Published the complete study of the Iberian site of Casa de Cabeza of Requena, where wine production for more than 2,000 years has been documented - 26.07
This site uses cookies and analysis tools to improve the usability of the site. More information. |