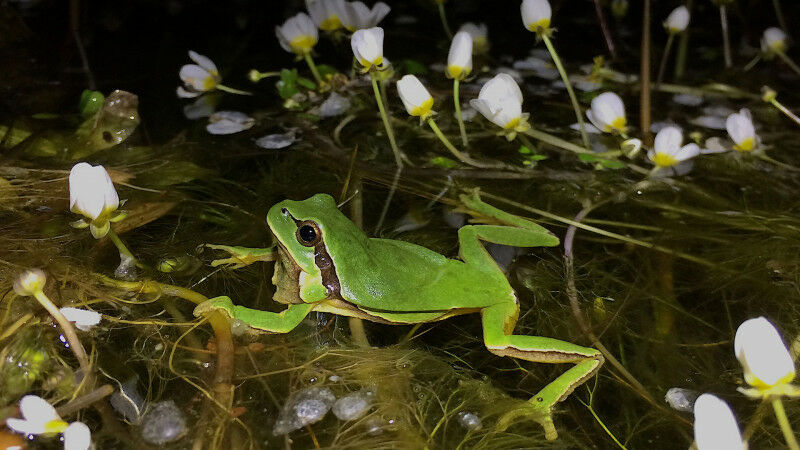 Through the combined use of new technologies, sound recognition algorithms and mathematical models, ecologists from the Autonomous University of Madrid (UAM) have proposed a method to assess the consequences of climate change on biodiversity. The results, published today in Methods in Ecology and Evolution, have been successfully tested on an Iberian amphibian, the San Antón frog (Hyla molleri).

The sounds that animals use to communicate have been a powerful tool for study in ecology and related sciences. Songs, trills, chirps and various vocalizations emitted by birds, mammals, amphibians or insects contain valuable information for scientists who strive to capture these signals and decipher their meaning.

Now, thanks to the use of new acoustic tracking technologies, a group of researchers from the Universidad Autónoma de Madrid (UAM), the Universidad de Alcal de Henares (UAH), the Fonoteca Zoológica del Museo Nacional de Ciencias Naturales (MNCN-CSIC), the University of Seville and the Universidade Federal de Gois (Brazil), led by Diego Llusia and Camille Desjonquères, from the Department of Ecology of the UAM, has demonstrated that these sounds can offer clues about the effects of climate change on the behavior of animal species.

Specifically, by combining automatic sensors and voice recognition algorithms with mathematical models, the team has developed a method to examine how species’ reproductive rates or ranges are changing and to predict the long-term impact that climate change could have on their populations.

The song of the San Antón’s frog

Many species use acoustic communication to perform essential functions, such as reproduction, territory defense or foraging. If changes in the precipitation and temperature regimes restrict or alter the conditions necessary for these behaviors, it is to be expected that species may suffer changes in their activity patterns, modify the areas they occupy or even compromise their survival on a local or regional scale.

The methodology was evaluated for the first time in a species native to the Iberian Peninsula, the San Antón frog (Hyla molleri), whose individuals use song to find reproductive mates.

"The models developed have yielded promising results by robustly predicting the vocal activity of this species based on climatic conditions," say the authors.

"The method - they add - thus offers the possibility of calculating what are the ecological requirements of the species’ song and, according to different future scenarios, to estimate the probability that the animals will find suitable conditions to carry out their vital functions throughout the territory or the seasons of the year."

In sum, these results - published today in the journal Methods in Ecology and Evolution - provide a novel tool to identify possible changes in phenology and species distribution in the current context of climate change.

Several modeling techniques exist to predict the response of species to climate change, but they have some limitations. The proposed method aims to provide a new source of information to improve our ability to understand the consequences of climate change, with special emphasis on animal behavior.

To address this challenge, the researchers have proposed a novel integration between two scientific disciplines: bioacoustics and biogeography.

The first offers a wide range of knowledge and techniques for monitoring animal populations throughout their range using acoustic sensor networks, small sound recorders that automatically record the song of the species.

Subsequent analysis of the extensive bank of recordings obtained with this equipment requires the use of recognition algorithms that automatically detect the periods of vocal activity of the species. Finally, biogeography provides spatial modeling tools to understand how study animals are affected by changes in climatic conditions.

For researchers, the growing concern about climate change and its effects on the planet requires improved study tools. Only in this way will it be possible to understand the impacts that these changes cause on biodiversity and better understand how the rhythms and dynamics of nature are being altered.

"This line of innovative research will continue to be developed in the coming years by our team, an international pioneer in the field of bioacoustics. However, it should be noted that the most important and most urgent thing is the implementation of measures to help mitigate these effects, with the application of decisive political actions and the awareness and commitment of citizens to reduce our carbon emissions into the atmosphere as soon as possible," the authors conclude.

Researchers question artificial grass in urban parks because although it saves water, it reduces the number of birds - 26.09
Related Stories
Innovation
The Valencian Innovation Agency renews the Scientific Business Innovation Units at the IFIC and ICMOL - 23.09
European university alliance YUFE starts programme to promote entrepreneurship and innovation - 12.09
This site uses cookies and analysis tools to improve the usability of the site. More information. |